Issue :- The server principal owns one or more endpoint(s) and cannot be dropped hence unable to delete a login from SQL Server

You can see from the below screen the account is having authorization on Endpoint, to confirm this you can fire a select query on sys.enpoints or you can use below mentioned query to fetch details of account who owns endpoint.

The server is configured is having mirroring configured on it and this account is owning that one single mirroring end point, so we cannot delete his account who is earlier SYSADMIN and owning this endpoint.

This will change the authorization of endpoint without disturbing the mirroring and then you can drop that Login.

Some time when you configure SCOM (System Center Operation Manager – Monitoring Tool)  in your environment and configure a SQL Management Pack to monitor “Memory Pages Per Second” then you will get the below alert as mentioned ” Memory Pages Per Second is too High. – The threshold for the Memory\Pages\sec performance counter has been exceeded“

Here this counter Pages/sec means it’s the rate at which pages are read from or written to disk to resolve hard page faults. In more detail it identifies the rate of pages read from and written to disk for resolving memory requests for pages that are not in memory. In other words, Pages/Sec represents pages input/sec and pages output/sec. (Pages output represents the pages removed from memory heading to disk.).  If you talk about page fault it happens when the memory manager does not find the block of memory that it needs in the cache. That memory has been swapped out to disk, and this will degrade your Server \SQL server performance.

This rule will generate an alert when the pages/sec exceeds the defined threshold for a sustained period of time and Default is Memory\Pages/Sec >50).

Hence please make sure that this rule must be tuned accordingly to the server configuration keeping in mind about the performance capacity of server before it can be used. So before enabling this rule create a baseline Pages/Sec performance signature for each system. Once you create a baseline, set a default threshold that will work for the largest percentage of managed nodes and then use the override feature to define threshold for the exception cases.

From the SQL Server perspective when you receive this kind of alert it’s a primary indicator suggesting that there could be an issue of memory pressure\bottleneck, but that depends on several factors how frequent you are getting this alert from same server and how it is configured, allocated memory to SQL, no. of instances running on server etc.

Note: A high number in the Pages/Sec counter does not necessarily mean that you have a memory problem, it could be a temporary issue but if the same server is generating same kind of alert then please monitor the below mentioned counter over a period of time to confirm if there is a need to add more memory to your system to reduce the number of page faults and improve performance.

Hence from the Capacity Planning point of view from the performance perspective ,keep watch for an upward trend in the value of Memory\Pages/Sec and add the memory when paging operation absorb more than 20-50 % of your total disk I/O bandwidth

Once a while this kind of alert from SQL is ok you can monitor for some time and resolve if all goes fine, but if the alert is frequent then you have to investigate on the above counters because if could an issue of memory crunch\bottleneck and I would say the trend for these counter values is more important than their absolute value at any given time and If you notice that the average Page Life Expectancy is dropping over time, that is quite significant indication(and not in a good condition).

Conclusion: Don’t ignore this alert if it’s coming frequently from certain servers and during that time on focus on trend obtained from above counters (You can ignore this alert if you are aware that during certain time some heavy activity is going on server and because of that this alert appears and off Couse if customer is not complaining). Also If you are sure that for some server you can’t do anything because their hardware lifecycle is over and you don’t want to spend too much on them then define your threshold again or override this alert with the help of SCOM team in your environment, otherwise if you feel that it’s actually a serious issue on server on the basis of above counters then ask customer to add more memory on their dedicated server but make sure before asking him to add more memory although these days the memory chips are quite cheap but still there is a cost involve.

In-memory OLTP or Hekaton these 2 terms can be used interchangeably but Microsoft officially announce this new technology name as “In-memory OLTP”. “Hekaton” is Greek word for “hundreds,” and it was given this name for its ability to speed up database function 100x (possibly).  It certainly increases application speed by 10x and nearly 50x for new, optimized applications but it depends of several parameters.

Hekaton works by providing in-application memory storage for the most often used tables in SQL Server, but don’t confuse this is entirely different from an older technology you might heard of DBCC PINTABLE ( database_id , table_id ).

DBCC PINTABLE does not cause the table to be read into memory. As the pages from the table are read into the buffer cache by normal Transact-SQL statements, they are marked as pinned pages. SQL Server does not flush pinned pages when it needs space to read in a new page. SQL Server still logs updates to the page and, if necessary, writes the updated page back to disk. SQL Server does, however, keep a copy of the page available in the buffer cache until the table is unpinned with the DBCC UNPINTABLE statement.

DBCC PINTABLE is best used to keep small, frequently referenced tables in memory. The pages for the small table are read into memory one time, then all future references to their data do not require a disk read, but still the internal structure will remain page based.

Hence if the internal structure is page based then definitely there will be locking, latching and logging, also they use the same index structure which also require locking and latching.

In SQL 2014 “In-Memory OLTP” it entirely different or we can say also say that it’s an enhancement of previous technology DBCC PINTABLE. Tables in In-Memory OLTP are stored in entirely different way from disk based tables, they use entirely different data and index structure because this feature did not store data on PAGES and separate index mechanism, hence removing the need to latching and can solve the problem of latch contention mostly happens in case of last page insert.

You can check this problem via DMV’s and investigate the issue from below queries.   Select * From sys.dm_os_waiting_tasks

Now as In-Memory OLTP works on a new structure as mentioned above we have below advantages. Elimination of disk reads entirely by always residing in memory

As you can see from the above diagram the tables and indexes are stored in a memory in different way, there is no buffer pool like conventional architecture also as there is no 8KB page based data structure MS is using stream based storage, and only files are appended to store the durable data.

Here you also have an option of Non-Durable table as well, in this option only table schema will be durable not data, so these tables will be re-created once the SQL start after a crash without data.

Indexes in In-Memory OLTP is also different they are not stored in a normal B Tree structure in fact they support HASH indexes to search records. Every memory optimized table must have at-least one Hash Index because it is the index that combine all rows into a single table. Indexes for memory optimized table are never stored on disk in-fact they are stored on memory and recreated everyone the SQL restart and data is inserted into the memory.

Bellow you can see there are 3 disk based tables T1, T2, and T3 with file-group on disk, but once we once we want some tables to be in memory that there will be a new space in 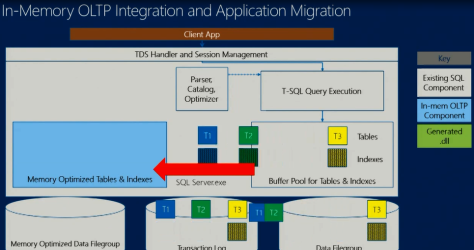 SQL memory and in addition there will be a new type of file group for stream based storage to persist copy of data to ensure data can be recovered in case of crash. Now consider a scenario we want to move some disk based tables to memory then we have to first drop them and recreate them with special syntax and the situation will look like mentioned below, as you can see there is a separate fie group called memory optimized file group and all DML operations are logged in conventional log file and as you can also see indexes and data exists in memory itself, note that there will no copy of indexes on disk.

Native compilation refers to the process of converting programming constructs to native code, consisting of processor instructions that are executed directly by the CPU, without the need for further compilation or interpretation.

In-Memory OLTP compiles both memory-optimized tables and natively compiled stored procedures to native DLLs when they are created. In addition, the DLLs are recompiled after a database or server restart. The information necessary to recreate the DLLs is stored in the database metadata.

Hence you will get much performance gains in many aspects like the storage engine here itself is lock and latch free, hence there will be no locking and latching and in case your application is having performance bottle neck because of latch contention then you can use this feature of In-Memory OLTP to remove latch contention and you will see great result once you move some suffering tables in memory. Natively compiled stored procedure will give to 10-30x benefit by improving execution time, and also memory optimized table require lesser logging than disk spaced table as no index operations are logged, but still the latency could be there for the log, because the commit of transaction will not complete till the log is hardened to disk so if there is good storage then this will not be an issue.

Although the In-Memory OLTP tables provides lot of performance gains but it has lot of limitations too and those must be taken care before you decided to implement this in your production.